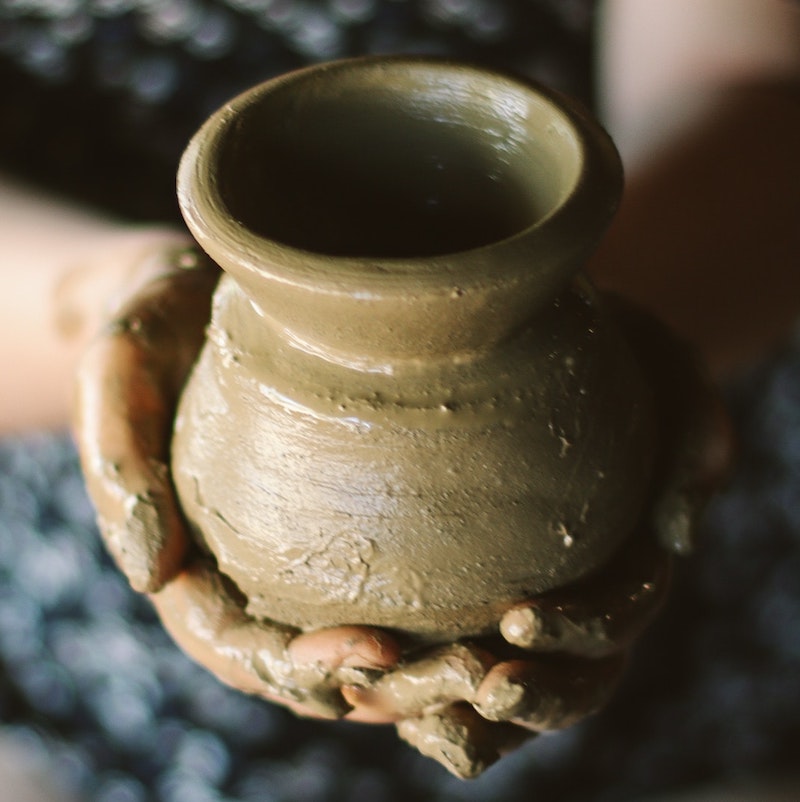 “It’s locked,” I said to the red-haired woman who had just shuffled up the flagstone walkway and grabbed the brass handle of the door to the pottery studio.

“We’re waiting for the instructor,” I offered, as a bit of friendly warmth against the chill of the February morning.

Cupping a hand over his forehead to block the morning glare, my husband peered in through one of two glass panels that flanked the entrance door, and mumbled something about maybe spotting a custodian.

I glanced again at the flyers that were taped to the inside of the windows. They showcased photographs of pottery and advertised upcoming exhibitions. I wondered what it must be like to craft such objects of beauty from lumps of clay.

By that time, a small group of people had gathered outside the studio, all having arrived early for their first day of a beginner’s ceramic class. A gust of wind whipped through the giant oak trees that loomed overhead and sent leaves tumbling down. Some settled softly onto the shoulders and hair of the smiling blond woman who sat next to me on the stone wall.

She was one of those women who didn’t threaten me. Maybe it was her hot-pink sweat suit, or maybe it was the way her jaw rotated in easy half circles as she chewed gum, her legs dangling and swinging. I thought she was probably the type of person who is always open to talking with strangers.

“Are you here for Ceramics/Pottery I?” I asked.

“I’ve signed up for three classes, actually. Ceramics, watercolor and jewelry making,” she replied, with a broad smile.

“I made jewelry once,” I said. She was mildly impressed. That was how I met Darlene. A tiny bond was formed.

There were thirteen students in Ceramics/Pottery I, and not all were beginners. Of the students seated at the six large worktables in the studio, the three women who had snatched table #1 struck a nerve. Maybe it was their matching mechanic’s zip-front overalls or just the fact that they had done this before. Whichever it was, their presence intimated me.

During the second week of class, a table #1 woman showed off a clay horse that she had carved. To my annoyance, it actually resembled a horse. In my mind, the women of table #1 had suddenly become the high school cheerleaders I had despised in my youth. I was beginning to feel like a teenage girl who had been passed over for the pep squad—probably because I had been. I could visualize my high-school yearbook photo—fuzzy-haired and grimacing—and, once again, I felt inferior.

By the third week of class, I was becoming mildly depressed and feeling more inadequate. As I compared my pots to what other students were creating, their pots always had lovelier shapes and cleaner lines. Except, that is, for Darlene’s. Her hand-built pots resembled mine—dog dishes, only bigger.

It was during this week that I asked our instructor if there were counselors on staff to advise those students who were found to be “craft impaired.” Seeing that my comment did not amuse her, I turned in Darlene’s direction and suggested she and I form a support group for the “clayly challenged.” She laughed and said she would sign up. In fact, all the students laughed, even table #1.

The instructor appeared annoyed. I had the feeling that she didn’t like me or Darlene. Throughout the class, she would periodically do that teacher thing—walking around the room, making comments to the talented students. Comments like, “Beautiful. I love the form.” Or “How clever you are. I love the symmetry of your piece.”

This group of talented students included my husband. Though he continued to encourage me, I always felt inept sitting next to him. His hand built pots had the precision of those thrown on a potter’s wheel. Mine resembled the small vessels and figures that sat drying on shelves marked, “Children’s Pottery I.”

Only Darlene and I observed the side-ways crook of our instructor’s head as she eyed our work and usually moved on in silence. Once she patted Darlene on the back, making no comments on her latest dog dish. This single act of compassion occurred the day after the instructor found out that Darlene didn’t own a dog.

As if I had not suffered enough, I was to be further belittled by a child-prodigy potter one Saturday morning when I came to the studio to do some trim work on a bowl. I had seen the boy and his mother here before. For a 5-year old child, he looked harmless enough. As he toiled away at his Playskool battery-operated potter’s wheel, he appeared confident of his objet d’art. He looked up and smiled at me as I took a seat at an electric potter’s wheel and centered my pot.

The boy’s mother sat in the corner of the studio at the kick wheel, which spun around easily with each touch of her foot. The moist clay succumbed to her deft touch and began to take the shape of something lovely. She was too young to have been at Woodstock, but with her waist-length blond hair and serene expression, she resembled a poster child for the event.

My husband sat next to me already working on his vase, trimming away excess clay. I gathered up a trimming tool and took a cursory look at my pot. This Kodak moment was about to change.

What occurred next had never happened to me before. I placed my foot on the pedal of the electric potter’s wheel and applied pressure. Either my foot slipped or the accelerator jammed. We will never know. My pot flew across the room and landed against the wooden corner of table #5, where the little 5-year old boy sat working.

He immediately stopped and looked at me. He didn’t bother to pick up my pot. He knew better than to touch other people’s work—I’m sure his mother had taught him proper potter’s etiquette. He made his way to where I sat, seeming to me to be moving in slow motion. Finally, he stood in front of me, one hand on his hip. His words whistled across his baby teeth, his l’s and r’s that began a word sounded as w’s in a sweet, sputtered Texas drawl.

“Wady, the first thing you need to wemember is you never, ever step aw the way down on that thing.” He pointed to the potter’s wheel pedal. By now, my husband was laughing. So was I. The little boy’s advice was simple and sincere. Everyone working in the studio smiled.

“Thanks, kid,” I said, patting his shoulder. I got up and retrieved my pot from the dusty floor.

“My name’s Petey. And you’re welcome,” the kid said. He turned and headed back to his Playskool potter’s wheel.

Weeks of class had left me with zero confidence in myself and my abilities to work with clay, but the incident with Petey had softened the hard edges of my critical mind. Why was I so worried about what other people thought?

My husband is also a perfectionist, but he possesses something I don’t have. He may suffer from self-doubt, but it doesn’t stop him from trying new things. Why was I so afraid? It was then that I heard a voice in my mind. It was my father saying, “If you can’t do something right, don’t do it at all.” Suddenly I was 10 years old again.

Perfectionism ran in my family; my father was a first sergeant in the Army and my mother kept the perfect home. She ironed the pillowcases, the sheets and even my dad’s boxer shorts. My two brothers and I were as well-scrubbed and neat as the house we lived in. I remember asking my mother to cut out my paper dolls—she was better at it.

Enlightenment found me in the sixth week of class. The clay gods finally smiled upon me that day and helped me understand the critical connections between perfectionism and creativity.

It was not a regular class day. My husband was going to do some finish work on one of his bowls and I had tagged along as I needed more practice time on the potter’s wheel. Mary Ann, a young woman from table no. 2, was there. She arranged her working tools at the potter’s wheel next to mine and soon centered a lump of clay.

I had observed Mary Ann during class and admired her talent. She was good at hand building. One day our instructor even told her so in front of the class. But today Mary Ann confided in me how inept she felt in class, and how disappointed she was in her abilities. Amid the soft whirring of the potter’s wheel motors, we each shared our thoughts about the class and our hopes for learning.

“What kind of work do you do? I asked, drizzling a bit of water on the lump of clay I had centered.

“I’m a nurse,” she replied, cupping her hands around the clay that held the promise of becoming a bowl. “Working with the clay helps me relax. But I like hand building better than working on the wheel. It allows me to be more creative. The wheel demands such perfection.”

“I would imagine being a nurse that perfection is very much a part of your life,” I said.

“No, actually, it’s not,” she replied. “I’m a psychiatric nurse. Perfectionism is what happens when an illness is diagnosed, a medicine is prescribed that cures the illness and the patient gets better. When I’m working with people’s minds, there’s no guarantee that things will work out perfectly.”

“So, hand building is better because it frees you from perfectionism?”

Her words tumbled through my mind like polished blue stones. My hands held the clay softly now as it rotated on the wheel. I didn’t want to form anything. I just wanted to feel the clay, the wonderful feeling of wet, slithery goop, softly resisting with each rotation. It felt like making mud pies, only grown up.

I didn’t follow the rules that day. I slowly pulled the clay upward, then gently pressed it down to the wheel. I found the center and made a hole with my thumb—the beginnings of a pot. The lump of clay was too thick, a little off center and would not become anything without a great deal of effort on my part. It was okay.

That day, I had learned that everyone feels the way I do at times. Most of what we do is not perfect in our eyes—someone’s pot is better looking than ours; they are creative and we are not.

I had learned that self-judgment and comparison extinguish the light of creativity. It was that day that I realized perfection must follow creation, and that I don’t have to be perfect while I’m learning. Once I have mastered the skills, only then should I seek perfection in my art, whatever it may be. Just as the moon reflects the light of the sun, perfection should mirror creation, not eclipse it.