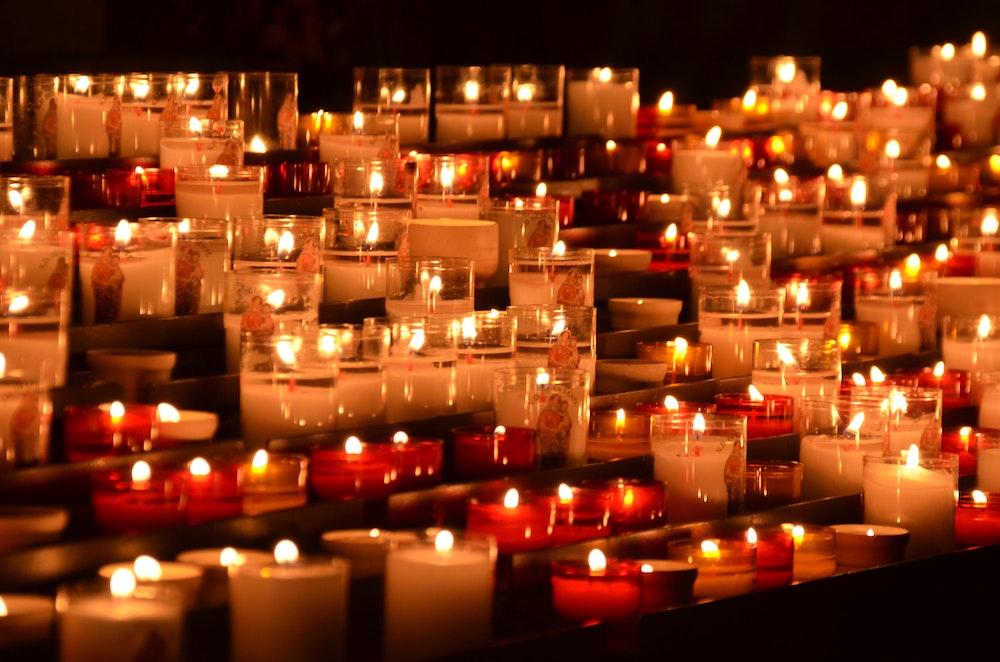 “Grace is defined as… “Divine love and protection bestowed upon man­kind, a virtuous gift granted by God, temporary immunity or respite: a period of grace.”

The pneumatic doors of the hospital emergency entrance opened to the touch of my feet. It was February 5, 1991, a Tuesday. Kelly, the essence of my life and only child, had been pronounced dead at 3:26 p.m. That afternoon, I became a lifetime member of a dreadful club. I became a bereaved parent. As I walked out of the doors of the hospital emergency room, I took my first step into a world governed by raw emotion and immeasurable tears.

I cannot speak for the pain and loss experienced by others, for grief is unique for each soul. I may only speak of my transcendence over loss. The act of transcendence is a crucial task. Surviving a tragedy is not enough.

Between the years 1942-1944, 15,000 children under age fifteen passed through the Terezin concentration camp. Determined to not simply endure imprisonment, some of them drew pictures of butterflies on prison walls and wrote poems based on the memories of their lives. Even though less than one hundred of them survived, their hope lives on today in a collection of their drawings and poetry, I Never Saw Another Butterfly. These children existed above and independent of their captors.

Grief can be such a captor and many feel it is easier to hold themselves hostage in grief than to break through the pain. Working through the pain of the ultimate loss, the death of a child, is an exhausting journey of many small victories and defeats, but the voyage to your destination is a spiritual one, to a place known as grace.

Prior to Kelly’s death, I had served as a volunteer for a local hospice, read books on death and dying, sat by the bedside of dying patients, and believed in the concept of life after death. But I knew in my gut that books and philosophy would not save me now. I was being asked to find my way out of a darkness that exhausted my soul, to a place where there was hope. Hope was an elusive intangible for the first year following my son’s death.

Then, slowly, I was blessed to witness my own personal Easter, a resurrection of my very being from the depths of a loss that so devastated my life that I truly believed there would be no surviving such a tragedy.

Unknowingly, the healing began with my first tear and the thousands that flowed after. Writing the eulogy for my son’s funeral nurtured my soul. The writing continued…in the form of a journal.

Grief is a harsh mistress. I was determined to face her. She was the dark pain in my heart. With all my courage, I invited her in, holding her close in an embrace, allowing the grief to penetrate my soul. I danced with her to music which contained no lyrics, no rhythm, only silence.

I lanced my own soul wound and welcomed the pain, knowing there was no greater suffering than the day I buried my son. In the exhausting darkness of night, I lit candles and consciously listened to music–Sting’s album, Nothing Like the Sun, his songs, Fragile and They Dance Alone, and Reba McEntire’s album, For My Broken Heart, her song, If I Had Only Known. The music evoked memories, both precious and sad, until the tears came, always silent, but hot and full.

Often I wrote in my journal, attempting to make sense of the dark abstraction of death and searching for the words to describe the joy, life and laughter that was taken from me. I deliberately emptied my heart of the tears I knew must be shed to facilitate my healing. With my asking, God held me tightly in the night and sent angels to dry my tears with the most tender brush of their silent wings.

I intentionally experienced nature: sat in the warm sun, fed the backyard birds, watched the morning and evening sky, took long walks, and planted gardens of flowers. The day after Kelly’s funeral, with utmost care and sacred ceremony, my husband and I planted a young nectarine tree. We named it simply, “Kelly’s tree.” It blossoms early every spring. When the tiny, delicate, pink flowers appear, I am thankful for the gift of Kelly’s love blossoming in this form.

I read grief books, both clinical and personal accounts. I found a support group specifically for grieving parents, attending the weekly meetings with the same fervor as an alcoholic at an AA meeting. I felt dead inside. I needed to be with people who empathized with my pain. I told my story, cried, and comforted others. As I heard the accounts of other parents (cause of death — murder, suicide), I felt grateful that Kelly died of a heart attack at age 23; death by illness seemed easier to cope with.

I read the daily obituaries, looking specifically for death notices of children and young adults, who had died. I wrote letters, in care of the mortuary, to the parents, expressing my sorrow for their great loss. When invited, I spoke publicly to a group of people who wanted to understand how they could help a friend or relative who had lost a child.

A Fresh Look at Purpose, My Child’s and Mine

I took a fresh look at purpose. I began to understand my son’s purpose. On August 26, 1967, Kelly Wayne Hales was born into this world. He entered quietly. He was sent by God to teach us all many things. When he was four years old, Kelly was diagnosed as having MPS, a congenital birth disorder that usually results in a myriad of bad things, including premature death.

During his brief life, he would overcome the challenges of multiple operations, including a spinal fusion at age twelve which would suspend his height at 4’8″ forever. He lived in a twisted, small, thin body and constricted leg muscles that caused a slight tiptoe walk.

Kelly’s teenage years were the hardest, enduring a “Jonathan Livingston Seagull” existence, banished by the flock and considered an outcast. But Kelly managed to cope with it all and matured into a young man with a sense of great compassion and understanding of life, buoyed and strengthened by a keen sense of humor.

As Kelly grew into adulthood, he overcame the emotional scars left by cruel remarks of teenagers and the curious stares of strangers. He accepted his physical disabilities. It was a time of new beginnings for him — a time when he began a spiritual journey. He knew he would have less time than most of us to complete his understanding of life, himself, and of his own personal relationship with God. His love became absolute and overwhelming. He learned in twenty-three years what it takes most of us a lifetime to learn. He accepted his mortality. I can use chess (a game he played with passion) as a metaphor for Kelly’s life. He came into this life as a pawn; he left as a knight. He made the journey home.

Two or three days after Kelly died, I asked the silent question, “Why, why did Kelly die?” The still voice replied, “So that you may do your work.” Following my healing process, I have devoted my life to helping other bereaved parents, including facilitating the weekly support group that once helped me, and writing about the journey of healing after child loss.

Advice from the Experts

Peg Armstrong, a grief and bereavement specialist and therapist in San Antonio, Texas, told me, “When John F. Kennedy was killed, Jacqueline Kennedy, by her actions, taught Americans how to grieve. Don’t cry. Don’t show your pain. Be stoic.” She continued, “During the earthquake in Mexico, the relatives of the dead ripped off their shirts and screamed their grief to the heavens. They are practicing healthy grieving. They are expressing their pain. They will resolve their grief.”

She related another story of an American father whose son had committed suicide. The father told her, “You will be so proud of me — I haven’t cried. I’ve been taking care of all the matters that need attending. I’ve been keeping myself very busy.”

She was saddened to think that he believed she would be proud of him because he had purposely avoided crying over the death of his son.

While working with Mother Theresa in India, Peg Armstrong deliberately held dying children. She described her feelings to me, “When the children died, I felt their bodies soften and their spirits leave. It was very peaceful; there was no pain.”

Elisabeth Kübler-Ross, a medical doctor, psychiatrist, and internationally acclaimed expert on thanatology (the science of death), wrote in her book, Death, the Final Stage of Growth, “The ultimate goal of grief work is to be able to remember without emotional pain and to be able to reinvest emotional surpluses. While the experience of the grief work is difficult, slow and wearing, it is also enriching and fulfilling. The most beautiful people we have known are those who have known defeat, known suffering, known loss and have found their way out of the depths. These persons have an appreciation, a sensitivity, and an understanding of life that fills them with compassion, gentleness, and a deep loving concern. Beautiful people do not just happen.”

I cannot tell exactly when or how the pain began to change, or even subside for brief periods of time. But I can speak of a morning sunrise as I quietly waited for the colors to spread throughout the eastern sky. On this day, my world was transformed. I watched the world awaken, observing the clouds. As I focused on the clouds and morning colors, the more at peace I felt. The clouds appeared stationary —

the pattern undeviating. The clouds and the pastel morning light seemed prearranged to instill feelings of splendor and serenity.

I had seen clouds such as these once, painted on the sacred space of a cathedral ceiling. I was grateful for the solitude of this moment. It was as if a portal had opened — allowing me to penetrate the veil between heaven and earth. A deep and lasting peace washed over me. I felt connected to Kelly’s spirit.

I prayed that the moment would not end, but it did. The light expanded. The clouds changed places with one another, and the day began. The feeling of vast tranquility remained with me. I felt blessed to have shared the birth of the day and the dawn of my transcendence, with my heart wide open, in the company of the spirit of my son and in the midst of angels.

There are many paths from grief to grace. This has been mine. May you be guided to that which ministers to your soul. Heal yourself. Heal your world. Do whatever it takes to empty your heart of pain and allow grace to envelop the sorrow.